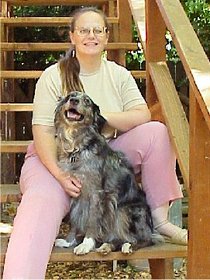 C.A. Sharp is a science writer and an internationally recognized lay expert on canine genetics and hereditary diseases.

For over two decades Sharp has collected data on hereditary disease in Australian Shepherds, using this information to assist researchers and provide informal genetic counseling and pedigree analysis to breeders and owners.

Sharp has frequently assisted researchers in canine genetics on projects ranging from coat color to ophthalmology to longevity. Her efforts include spreading the word about the projects, educating people about the subject of the research, and facilitating data collection.

Sharp has written extensively on genetics and hereditary disease, initially for breeders of Australian Shepherds but more recently for a wider audience. She has since 1993 published Double Helix Network News, a quarterly canine genetics newsletter. Helix has been a finalist in the Dog Writers Association of America’s annual awards competition numerous times, twice winning "Maxwell" awards, one for the newsletter itself and for the feature article "The Price of Popularity." Sharp was the first recipient of AKC Canine Health Foundation’s Golden Paw Award for the article "The Rising Storm." Sharp is currently working on a book.

Schmutz, Berryere and Sharp  2003 KITLG maps to canine chromosome 15 and is excluded as a candidate gene for merle in dogs, Animal Genetics Feb 34(1):75-76.