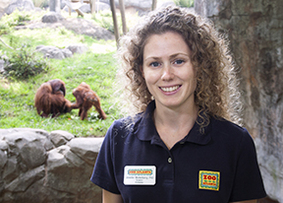 Dr Jennifer brings to ICB her experience in the genetic management of small, segmented populations, which she is putting to good use as the Curator of Primates at the Atlanta Zoo. Previously, she served as Small Population Research Biologist at the Smithsonian Conservation Biology Institute - Center for Conservation and Evolutionary Genetics. Previous experience includes work as a Research Assistant, and Golden Lion Tamarin Conservation Program Coordinator at Smithsonian’s National Zoological Park. Jennifer is a member of the IUCN Conservation Breeding Specialist Group, an elected member of the Golden Lion Tamarin Association, and serves on the board of Save the Golden Lion Tamarin. She also serves as the International Studbook Keeper for golden lion tamarins. Her research interests include in situ and ex situ small population biology, particularly developing management strategies to maximize long-term population viability.  Jennifer holds a Bachelor of Science degree in Biology from the University of Minnesota-Twin Cities and a PhD in Environmental Science from George Mason University. She serves as an adjunct faculty member in the George Mason University Department of Biology/Department of Environmental Science.

Lynch, WJ, ME Roth, JL Mickelberg, and ME Carroll.  2001.  Role of estrogen in the acquisition of intravenously self-administered cocaine in female rats.  Pharmacology, Biochemistry and Behavior 68:: 641-646.