There are four Belgian varieties that vary considerably in population size. The Laekenois is the least populous and the Tervuren is most. Throughout the history of the breed, the variety designations have changed multiple times. Currently, except in the US, the four varieties are considered a single breed although cross-breeding might be permitted with permission. In the US they are treated as separate, "pure" breeds.

What we choose to call the varieties and whether we treat them as separate breeds or just varieties has profound implications for the genetics of the populations. Most basically, small, closed populations accumulate inbreeding more quickly. This is predictable and unavoidable.

This means that regardless of how carefully you breed, the genetics of the population can be changing just by chance in ways that are very detrimental. And the kicker here is that most populations of purebred dogs are not being randomly bred. In fact, we tend to deliberately breed together dogs that are more closely related than the average of the population, so the rate of increase in inbreeding in our real populations is almost always increasing much faster over the generations than predicted of a randomly breeding population.
The evidence of this is in the graph below. The green line is the generation-by-generation level of inbreeding predicted if the animals were randomly breeding. (It's not a straight line because it uses the actual number of dogs and their inbreeding to predict the next generation and not a simulated population.)

The red line is the actual inbreeding observed in the population. This graphs says that if the average inbreeding of the population is ALWAYS much higher than predicted if the animals were randomly bred. Over the last century, breeders could have done a much better job of controlling the rate of inbreeding, but instead they selected breeding pairs that were closely related.
​ 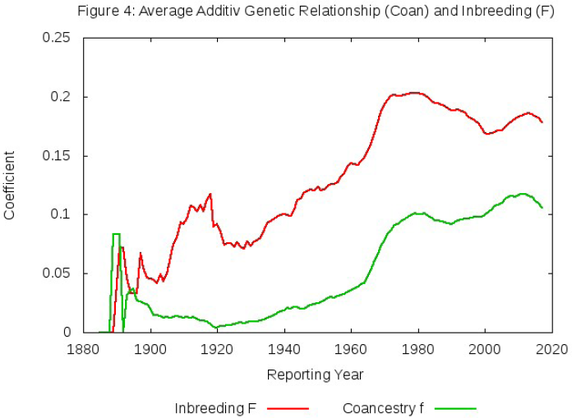