How many genetic disorders are there in dogs?

The most up-to-date list of genetic disorders in dogs is called "OMIA" -  "Online Mendelian Inheritance in Animals".  This list is for all animals but most of the information is for domestic animals or those used for research or under management because they're endangered.  This list includes mostly genetic diseases, but it also includes a few for some normal traits like coat color.

The first column is the total number of traits or disorders known, and the second is the number of these that are thought to be "Mendelian" in inheritance.  That means that there is probably one or just a few genes involved that are inherited in an uncomplicated way.  This would include traits caused by a dominant gene, in which case an animal needs to inherit only one copy to express the trait; and traits caused by a recessive gene, in which case an animal needs to inherit two copies to be affected.  (If you need to brush up on your Mendelian genetics, the Wikipedia page.)

It's worth exploring the OMIA information for dogs.  For instance, it lists 9 different types of dwarfism, only three of which have identified the causative gene.  Today, thee are 23 kinds of congenital heart disease (some of these might be versions of another, e.g., "cardiomyopathy" vs "cardiomyopathy, dilated"; until it is know whether these are the same they're listed separately).  There is a gene identified for only one.  There are at least 15 types of PRA (progressive retinal atrophy), and yet more are discovered on a regular basis.  Most of these seem to be caused by a single mutation - a little mistake in the DNA probably created probably generations ago but passed from parent to offspring silently, because a recessive mutation is not harmful if an animal only gets one copy.

There are also many different mutations that can result in "lysosomal storage disease", a catch-all phrase for the dozens of disorders that result when a critical step in some metabolic pathway is broken, typically because of a missing enzyme.  These are called "lysosomal" because they occur in the lysosome, and organelle in the cell responsible for keeping all the metabolic machinery in the cell tidy and working properly by getting rid of metabolic byproducts by breaking them down into substances that can be used for other cell functions.   When one of the many steps required to do this is broken, this cellular rubbish just accumulates instead of being recycled, hence the name - "lysosomal storage disease".  Since there are many processes involved, there are many steps that can be broken by a mutation.

There are other disorders on the OMIA list that fall into a number of other categories - retinal disorders, embryonic lethal, platelet disorders, and so on.

If you're trying to breed healthy dogs, the number of genetic problems you need to dodge is daunting.  Scanning down the list of other species, you'll see that the most numerous domestic animals (cattle, cats, sheep, pigs, horses, and chickens) also have many disorders, but dogs are in a league of their own.  Is this because they really have more genetic diseases, or because more have been reported and described?  I don't know how many cattle there are in the world, but I would suspect that they rival or even outnumber dogs, yet they have 30% fewer identified genetic disorders.  And cats have only half the number known for dogs.  Even allowing for some bias in reporting, the high number of inherited disorders in dogs is sobering. 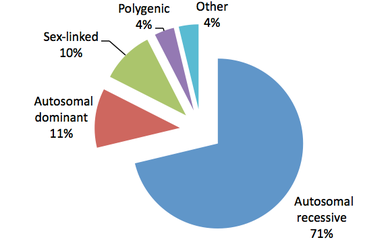 In fact, among the biologists and geneticists that study dogs, there is a clear consensus about why dogs have such a burden of genetic disorders.  They are the predictable consequence of breeding animals in a closed gene pool using protocols that result in increased homozygosity, in which an animal gets two copies of the same allele at a locus.  The nice thing about high levels of homozygosity in a purebred dog is that it doesn't matter which of the two alleles is passed on to an offspring because they are both the same.  Therefore, the offspring will be more similar to each other, and more of the traits of the parent are likely to be found in the offspring.  But the unfortunate downside of this is that mutated genes are just a likely to be homozygous as the good genes that you want to be passed on to the puppies - and a puppy that inherits two copies of a recessive mutation will not have a good, functional copy of the gene that should be at that locus.  Whatever that gene is supposed to do will be broken.  Some of these broken genes are for things that are relatively trivial - maybe something that reduces growth rate slightly, or increases shyness a bit, or makes the texture of the coat a bit softer.  These are things the dog (and you) can live with, and might not even be noticed if they fall within the normal scope of variation in these traits.  But some of these mutations will break something significant, and a dog that gets two copies of that gene will be affected by a disorder of some sort.

Notice that I have been talking here about recessive mutations that are only expressed if a dog gets two copies.  What about dominant mutations - aren't there some of those to worry about as well?  In fact, yes, and a dog only needs to get one copy of that gene for it to be expressed, so they can be a real problem.  If they cause problems early in life, affected animals can be removed from the breeding stock, but if they don't have a noticeable effect until after a dog has matured and had a litter or two, that mutation will be passed on to the next generation.  This certainly isn't a good thing, but once breeders are aware of the problem they can identify animals likely to have inherited the gene and act accordingly.
The reason recessive mutations are really a much larger problem in dogs is because they are insidious and silent.  All dogs - all animals - have mutations, and but if they are recessive you have no way to know they are there.  So a perfectly healthy dog will have it's own, unique load of mutations, that cause no trouble at all.  But this also means that breeders have no way to know they are there - they are unknowns, lurking in the genome of every dog.  No dog is without at least a few.  You can reveal some of these by close inbreeding (e.g., sib-sib, or father-daughter), which increases the probability that a puppy will get two copies of a mutation that results in a disease, and those dogs can be removed from the breeding population.  But you would have to produce a lot of these very closely related puppies to turn up every single mutation, and if the effect of the mutation is not obvious (e.g., a reduction in fertility) it won't be detected.  So even this strategy of close breeding to reveal hidden mutations is not foolproof.  At the end of the day, all dogs still have recessive mutations.  And breeding in a closed gene pool in a way that increases homozygosity means that sooner or later, some of them will become a problem.

There is no debate among biologists and geneticists about why the list of genetic disorders in dogs keeps getting longer.  This is both a predictable and inevitable consequence of the way purebred dogs have been bred for the last 150 years.  And if you think for a moment about why this is, you'll also realize that DNA testing might prevent producing puppies with a specific genetic disorder, but you can't test for mutations that aren't known yet.  And with each generation, as homozygosity in a breed increases (as it must in a closed gene pool), so too will the expression of these disorders caused by recessive mutations.  Breeders are trapped in a cycle of genetic whack-a-mole, where the population of moles is huge but hidden underground.  You can never know where they are or where they will appear.  Equipped with a hammer, you can only whack them when they stick their heads up.  The biology does not work in the breeder's favor here; the breeder will never win.

What do we do about it?

Once again, the biologists and geneticists agree - the solution to this problem is to change the way purebred dogs are bred, and the strategies to do this have been in practice for decades in the breeding of many other species of domestic animals.  In fact, these strategies have been used for generations in the breeding of service dogs such as guide dogs, which need health, long life, and very specific attributes of size, coat, temperament, intelligence, etc.  There is no reason why these techniques can't be used by ALL dog breeders, where they will reduce genetic disorders and improve the ability of breeders to produce happy, healthy puppies with the breed-specific traits the breeder wants.

If we're going to start breeding for the future, we need to make some adjustments in the way we do things and also learn some new techniques that will improve the set of tools breeders have to work with.  Breeders will need to cooperate more, because they need to monitor and protect the gene pool of the breed, without which there is nothing.  There needs to be more transparency about health issues; we can't manage them if we don't know about them, and damage to the gene pool affects everybody.  We'll need some new computational tools and some statistical expertise, both of which are available.  And we need a critical mass of breeders who recognize that road we're on right now goes nowhere, and that a tweak of trajectory will put us on a path that will produce healthier dogs that better represent the best qualities of their breed, and that can live long, happy lives doing what they were meant to do.

Step #1 is to LEARN, and that's what we're here to do.  Start with the basics, which are listed at the top under Essential Reading.  Then we will work our way through identifying the problems in a breed and exploring the options for solving them.  Every breed will be different, and there are many that need to do this, so we should get lots of practice.  It's time to get started.  If you would like to join us, visit our Facebook group at the link above.