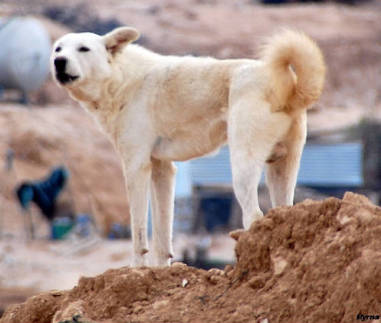 The Canaan Dog is a native of the desert and wilderness of Israel.  The original breeding stock was collected from the wild and from the nomadic Bedouin, and over the years, we have continued to add to this stock whenever we had a chance.  Today, more than ever, due to the gradual disappearance of the natural habitat of the Canaan and the ever more present possibility of his extinction as a wild dog, we are making all possible attempts to bring in more dogs from the wild and the Bedouin while they still exist.

Nearly nothing is known about the biology or genetics of this breed.  We are initiating efforts to genotype both wild and domesticated dogs to establish the original gene pool while dogs still exist in the desert, which we will be able to compare with domesticated dogs to determine if there is loss of genetic diversity. Breeders are reporting health problems in their dogs, so we need to consider how to design a breeding program that will address these problems and preserve the health of the domesticated dogs into the future, and prepare for the eventual loss of desert dogs as the Bedouin culture declines.

4)  Yearly evaluation of the genetic status of the global breed population and regional subpopulations, adjustment of breeding strategy if necessary, with analysis and reports available online.

5)  DNA analysis of the breed to identify the genetic background of the breed (as has been done by Huson for Alaskan sled dogs) and the presence of known canine genetic defects in the gene pool.  Genotyping of dogs with extensive information about phenotype of a dog and its relatives will permit establishing estimated breeding values (EBV) that can be used by breeders for more effective selection in breeding programs.