WHAT POPULATION GENETICS CAN TELL YOU ABOUT A BREED:
TOLLERS & HEELERS 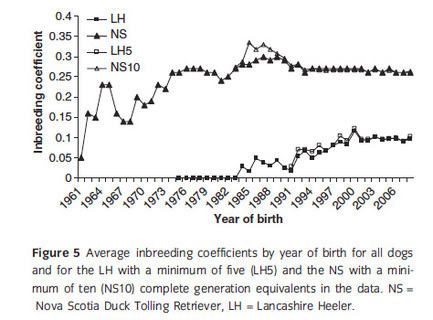 This is another excellent example of the application of population genetics to analyses of pedigree databases of purebred dogs, in this case for two uncommon breeds, the Nova Scotia Duck Tolling Retrievers and Lancashire Heelers.  Like Oliehoek did in his study of Icelandic Sheepdogs (see the previous posts beginning here), Maki gathered up the pedigree data for essentially the entire worldwide registered populations of these breeds back to founders – a total of almost 29,000 dogs for Tollers, and nearly 5,000 for Heelers.

For the Tollers, there were 22 original founder dogs and for Heelers 155 founders, but in both breeds only a fraction of the offspring were bred (13% of Tollers were bred, 25% of Heelers).   As a consequence, the average inbreeding coefficient of Tollers rose rapidly right at the start and reached 25% within 15 years of founding.  It has fluctuated slightly since, reaching as high as 30% at one point.  The average degree of inbreeding increased more slowly in the Heelers (remember, there were more founders, which will slow the rate of inbreeding) and appeared to have stabilized by the time of the study at about 10%.

The consequence of inbreeding is a reduction in the genetic diversity of the breed.  In both Tollers and Heelers, more than 90% of the genetic diversity present in the founders has been lost, leaving Tollers with genetic equivalent of only 2 dogs and only 6 for Heelers (“founder genome equivalents”).  The Lancashire Heelers are prone to eye problems but are otherwise generally healthy (http://www.lancashireheelers.org).  Tollers have a few disorders that are common in other breeds as well (hip dysplasia, progressive retinal atrophy), but more seriously there is now genetic evidence of a seriously compromised immune system resulting from loss of haplotype diversity (Hughes et al 2010; Wilbe et al 2009).  The immune system is the body’s defense against the world.  It’s job is to beat back all the harmful things nature can throw at an animal.  A compromised immune system leaves the animal defenseless against viruses, bacteria, parasites and other pathogens, and susceptible to a large array of potentially severe autoimmune disorders.  It’s a very complicated system, and to be broken even a little is very serious.

First, let me say that these genetic problems are certainly not unique to these breeds.  Many studies are finding similar problems in other breeds, but the papers I have commented on here are the most complete and are presented in a way that should be understandable to a dog breeder without advanced training in population genetics.

The loss of genetic diversity in both Tollers and Heelers is a result of several things, among them the relatively small founding populations and the use of some dogs more than others in breeding, both of which are common to many other breeds.  But I think the biggest problem has been that the kinds of information about population genetics that are presented in this paper have not been available to breeders.  The changes that occur in the genetics of the breed over time are a consequence of the activities of many individual and usually independent breeders.  Without the ability to coordinate breeding strategies, or oversee changes in the population genetics of the entire (world-wide) breed in real time, loss of genetic diversity can occur despite diligent efforts by the majority of breeders to use breeding strategies they feel are in the best interests of the health of their dogs and offspring.

As breed populations inevitably become more and more inbred, the need for current information about population genetics will become more urgent.  But every country has its own kennel club (or two or three) that keeps the stud books, and those records are not available in a form that would be useful for the kinds of analyses done here.  And there's the larger problem that these records are not interconnected in any way.  A dog from the UK imported into the US is registered by AKC with 3 generations of ancestry, and the rest of the dog's history is in the Kennel Club stud book.

The solution to this problem is conceptually simple.  We need a global pedigree database.  The logistics shouldn't be all that difficult, either; after all, every registered dog is connected to its parents, and so on back to the beginning of the breed with the registration of the founders.  We initiated the Global Pedigree Database Project in 2012, and the efforts of teams of volunteers are paying off as those breeds are able to begin population genetic analyses and design breeding strategies that will guide the future of the breeds.