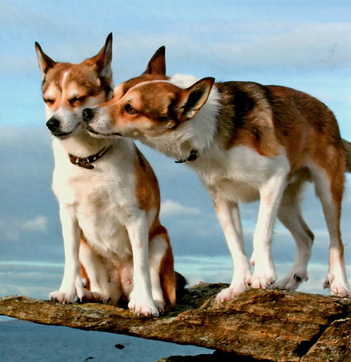 The Norwegian Lundehund is unique and of high cultural significance in Norway, but the breed is in danger of collapse due to a severe bottlenecked population (only 5 dogs as recently as the 1960s).

We will use high-density genomic information on 170,000 SNP’s and information about DLA and mtDNA which will be genotyped in a high proportion of individuals to:

By comparing genetic variation both at the nuclear and mtDNA levels in Lundehund nowadays with that of several museum specimens from before the two recent bottlenecks which occurred in the breed we will be able to:

We then will, by comparing the level of genetic variation across the whole genome, and at specific fitness-related regions of the genome within and across a number of dog breeds be able to:

Since about 40% of the Lundehund are affected by autoimmune disorders in the skin and bowel, collectively known as “Lundehund syndrome”, we will also collect stool samples from all individuals and do a metagenome study. To the best of our knowledge, this study would provide the first comprehensive metagenome-wide association study between gut microbiota and disease-associated host genetic markers.


Lundehunds suffer from a high incidence of bowel disorders, the “Lundehund syndrome”, which is often fatal. In order to help save this unique breed as well as provide fundamental insight into similar human gut disease, we propose to carry out a combined survey of the breed’s neutral and non-neutral DNA as well as the associated microbes in healthy and sick dogs. Research into the human microbiome has recently revealed important contributions of gut microbes to our health as well as disease. One of the key limitations on this field is that the relationship between our genes and which specific microbes associate with us is unclear. Solving this problem requires having a detailed genetic map of many individuals as well as the microbial composition of their guts, i.e. a “metagenome-wide association study”. Such datasets are difficult to obtain and prohibitively expensive in humans due to high human genetic diversity and the relatively low occurrence (~1%) of specific gut disorders. The Lundehund is different. Because of its extremely low genetic diversity and high prevalence of a characteristic gut disorder (~40%), far fewer individuals can be studied to yield the same type of metagenome-wide association information.