HOW TO READ A DENDROGRAM

A dendrograms is a way to visually describe the relationships between animals (and other things). The word is from the Greek: dendron =  tree, and gramma = drawing. It might be an evolutionary tree, or a family history, or the genetic relatedness of members of a group of dogs, which is how we use it.
To give you an idea of the various ways dendrograms can be presented, here is a variety of versions that depict the evolution of the vertebrates. The most primitive (oldest) groups of animals come off the main trunk of the tree first, and as you follow the trunk the more recent (in evolutionary time, or increasing complexity, or whatever) animals come off in sequence. You will notice that sometimes the beginning of the tree is at the bottom, sometimes on the left, and occasionally at the top.
Now here's something tricky. Remember how we showed how branches could be rotated where they come off the tree? Here's another example, just to make sure you get the idea.

There is a junction at #2 that can rotate. In fact, if we rotate the large branch of the tree that comes off at #2, the orange group that contains the foxes (at the top) can rotate down (and the blue group will rotate up) - and the orange branch of foxes will be sitting right next to the gray and island foxes. Here is the diagram, as it is originally on the left, and the same diagram with the branch at #2 rotated on the right.

We haven't changed any of the relationships of these animals with each other by doing this. In fact, everywhere there is a branch coming off, it can be rotated in the same way. The authors for whatever reason originally drew the diagram with the foxes at the top, but they could just as correctly flipped it as we see on the right so the foxes appear next to each other. With the foxes flipped, it does make it clearer that the gray and island foxes came off the Carnivore line first, and that all of the other foxes came off at the next branch more recently. Take some time looking at how the branches on a dendrogram are organized. Don't make the mistake of thinking that things placed next to each other are most closely related; relationship is indicated by the branches as they come off the tree.

The problem with dendrograms drawn this way is that if there are lots of groups to depict, the drawing can get very large and inconvenient to view. Because of this, some other ways of drawing them have been developed, but don't let these throw you. They are still doing the same thing.

Let's look at some that describe the relationships among breeds of dogs. The diagram on the right is similar to the ones you've seen (with the branches more scrunched). The various groups of breeds have been organized based on genetic similarity from DNA studies, and each branch is a group of related breeds. in the circular dendrogram on the left, they have actually included the branch for every single animal in the study. So here you can even see groups of related dogs within breeds.

The "base" of this circular tree is right in the middle, and the first branch that comes off is the coyote, then the group that includes all of the various kinds of wolves in the world (purple). Next to split off is the Basenji (yellow). Then there is a branch that includes a bunch of "primitive" breeds, which form their own clusters off the major branch. So you will see that the Alaskan Malamute, Siberian Husky, and Shar Pei come off as a cluster then divide, as do the Akita and Chow Chow. Remember that these branches can rotate just like we saw above. So we could rotate a junction and put the sight hounds and herding dogs next to the working dogs, but the information about the relationships would be exactly the same. So you need to be careful when you look at these - don't think that the German Shorthair is closely related to the Basset Hound. We can swivel a junction and the Shorthair would be next to the Min Pin. In fact, if you trace the branch to the Shorthair, you will see that the next branch to come off is for the Irish Water Spaniel, so in this particular case those two breeds are genetically more similar to each other than to any of the other sporting breeds in this study. 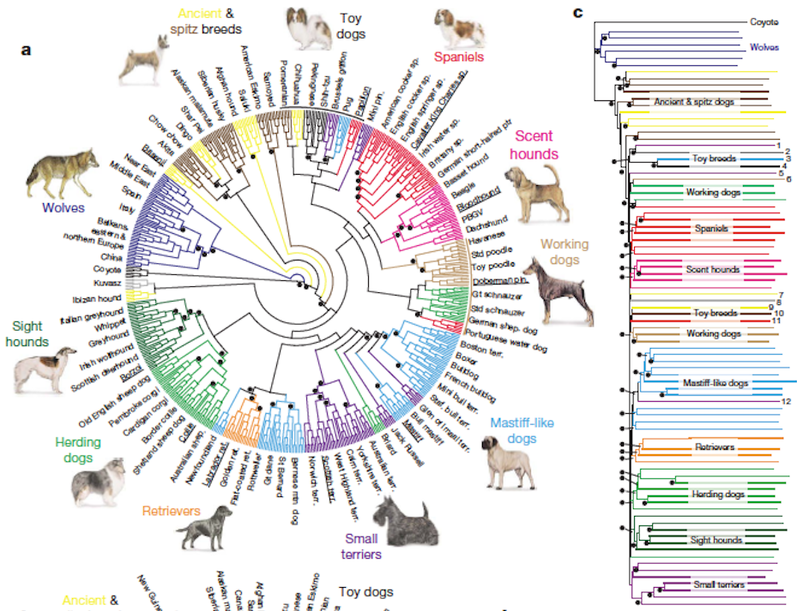