Asterisks (*) on bars indicate that in 50 comparisons of affected dogs with matched control sampling sets, there was a significant probability (P<0.05) that pure and mixed breed dogs differed in expression of the condition.  (See Methods and Materials: Statistical Analysis in Bellumori et al 2013 for details.)  Consequently, for the traits in which the comparison of purebred and mixed breed was significant (indicated by * above the bar), purebred dogs were at greater risk of having the disorder when OR* is positive (bars going up).  For the disorders in which mixed breed dogs had higher risk than purebreds (represented by negative values in the graph below), only two of the comparisons were significant - for ruptured cruciate ligament and "hit by car".  That is, for only one of the health traits (vs accident) examined were mixed breed dogs at higher risk than purebreds.  For 10 of the traits, purebred dogs had significantly (P<0.05) higher risk of being affected than mixed breed dogs. 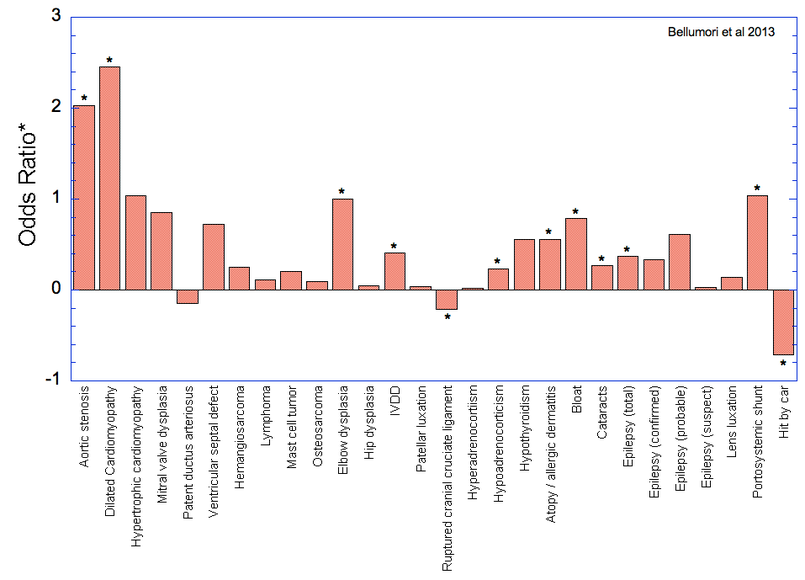 For the 10 genetic disorders which were significantly more prevalent in purebred dogs, data are presented for the 5 breeds with the highest rates of affected dogs plus the value for mixed breeds.  The data for each of these are graphed below. 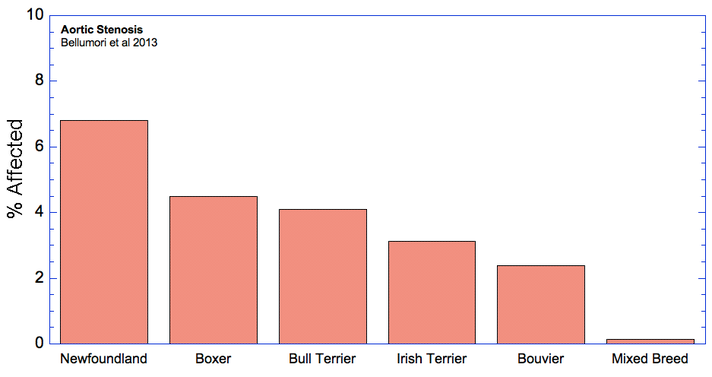 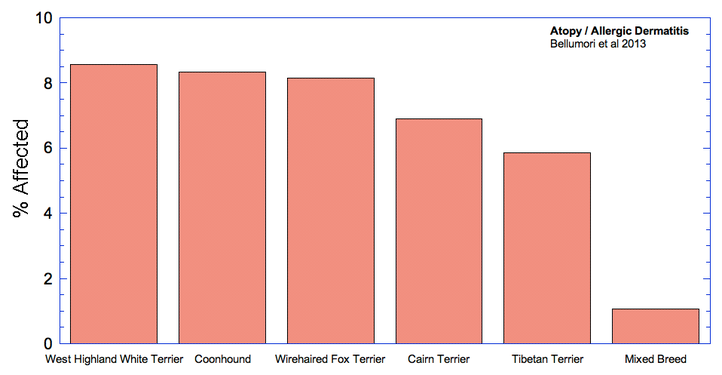 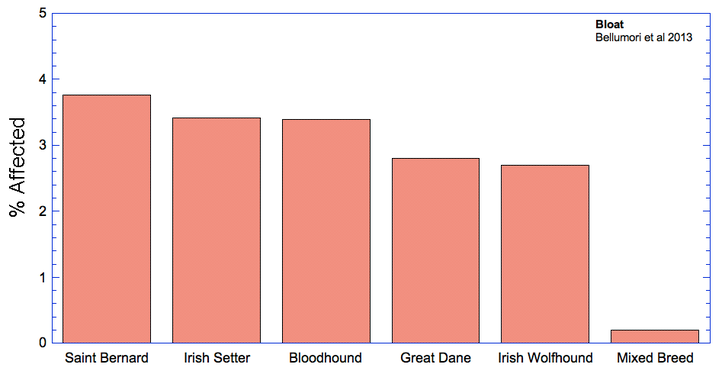 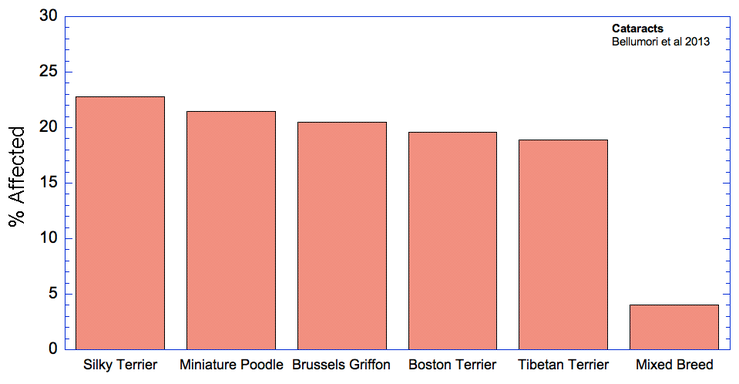 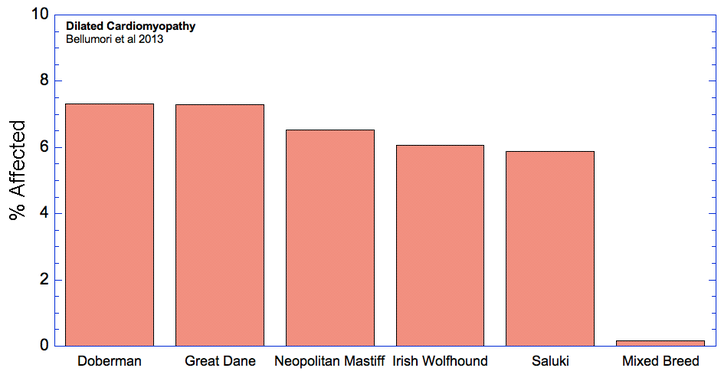 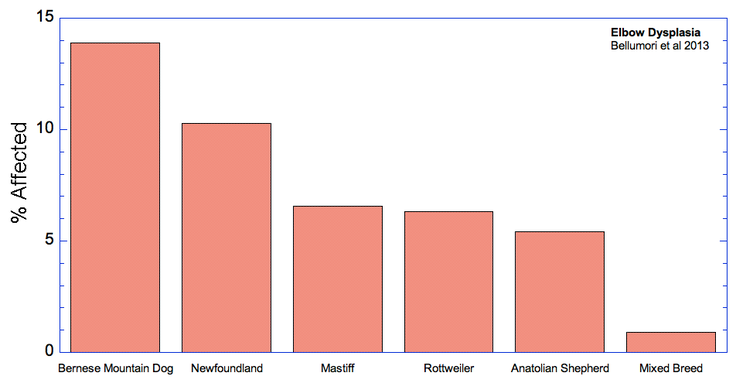 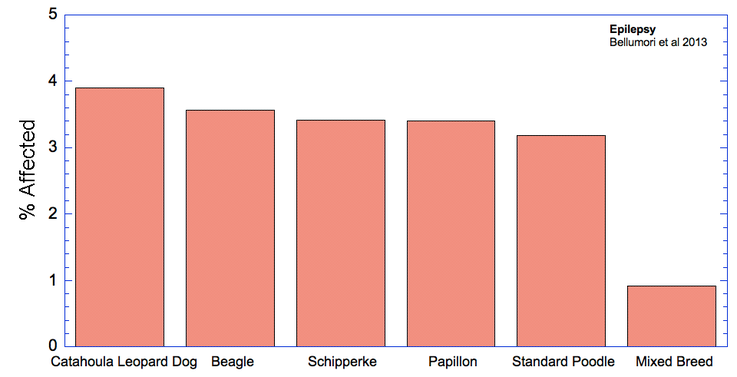 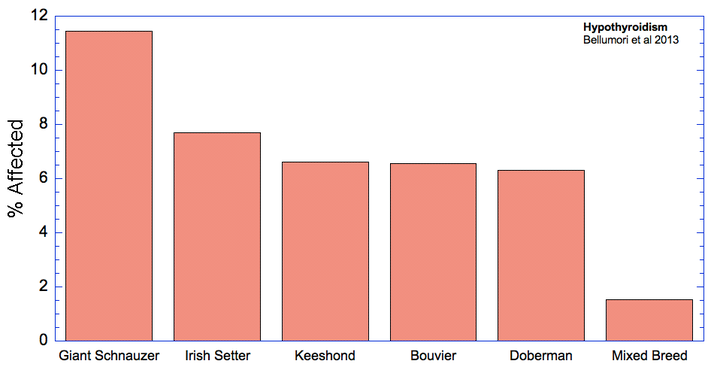 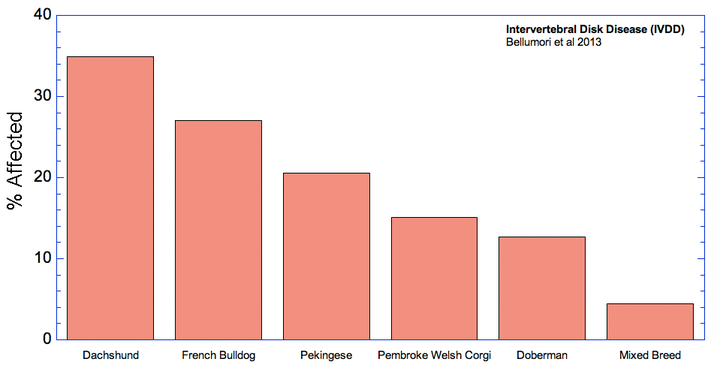 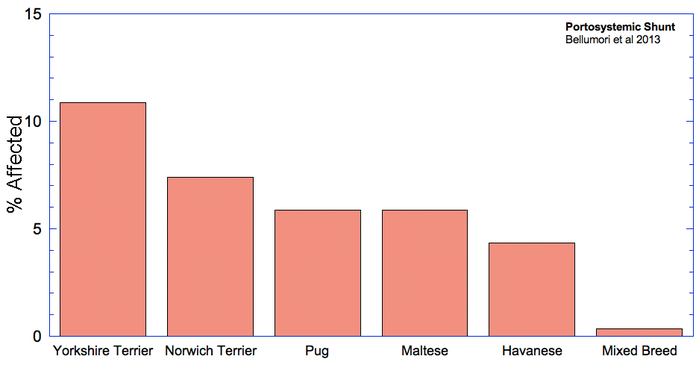 NOTE -  This study received considerable press because of controversy among breeders and the public about whether purebred dogs are more afflicted with genetic disorders than mixed breed dogs.  The study demonstrated that for 10 of the 27 disorders examined, purebred dogs were significantly more likely to be affected than mixed breed dogs (see the first graph above).  For one disorder, ruptured cranial cruciate ligament, mixed breed dogs were more likely to be afflicted, and they were also more likely to be hit by a car.  For the remaining 17 disorders, the study failed to find a difference between mixed and purebred dogs in the probability of being affected.  The statistical statement of failure to find a significant difference between mixed and purebred dog populations is not the same as saying that a particular disease is "equally common" in mixed and purebred dogs, which is how it was generally interpreted by the press and also apparently many breeders.

It is true - a mixed breed dog is not "always healthier than a purebred dog".  But it is the case - as this study showed - that purebred dogs have a greater risk of developing some of the hereditary disorders examined in this study than mixed breed dogs.  And certainly in the case of genetic disorders caused by a single recessive mutation, purebred dogs should be far more likely to be afflicted because they are also more likely to inherit two copies of the defective allele as a consequence of inbreeding.  Most of the disorders examined here are likely polygenic (i.e., involve complex effects of multiple genes).  For the dozens of genetic disorders afflicting dogs that are caused by single recessive mutations, purebreds will surely exceed mixed breed dogs in frequency.

The authors of this study tackled a very important question that is very difficult to address because collecting the "perfect" data set is impossible.  Using data on clinical occurrence of disease is fraught with difficulty because of many sources of potential complication - perhaps purebred dogs are more likely to receive veterinary treatment than mixed breeds, comparisons among groups (e.g., afflicted vs not, purebred vs mixed) are confounded by unequal sample sizes or differences among groups in the age, sex, etc of animals, and many other things that are a statistician's nightmare.  In fact, the "perfect" comparison will never be done.  But this study presents a large compilation of data and thorough analysis that is the first (and might be the only) attempt to explore differences in predisposition to disease in purebred and mixed breed dogs.